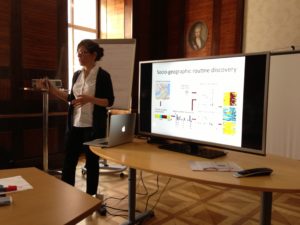 Mining patterns of human behavior from large-scale mobile phone data has potential to understand certain phenomena in society. The study of such human-centric massive datasets requires new mathematical models. In this talk I will discuss a novel probabilistic topic model, the distant n-gram topic model (DNTM), to address the problem of learning long duration human location sequences. The DNTM is based on Latent Dirichlet Allocation (LDA) and is advantageous for mining human behavior patterns for many reasons. This model is evaluated on 2 real mobile phone datasets collected by mobile phone locations, the first considering GPS locations and the second considering cell tower connections. The DNTM is presented as an example of a topic model for mining large-scale data related to human behavior. Extensions of this work will then be discussed, the first relating to data-driven mobility modeling for large-scale agent based models and the second relating to epidemics.

IMPACT 2022
After three years we were happy to organize another IMPACT for our partners, friends and ... ∞
Inaugural lecture/Antrittsvorlesung Edgar Weippl
On April 21, Univ.-Prof. Dipl.-Ing. Mag. Dr. Edgar Weippl had his Inaugural lecture at the ... ∞
Happy Birthday to us! SBA Research celebrates 15 Years.
A Retrospect. One and a half decades of company history offer a lot of official milestones ... ∞