Adrian Dabrowski presents his paper “Error-Correcting Codes as Source for Decoding Ambiguity” at LangSec Workshop, which is held in conjunction with IEEE Security & Privacy on Thursday May 21, 2015.

Abstract: Data decoding, format, or language ambiguities have been long known for amusement purposes. Only recently, it came to attention that they also pose a security risk. In this paper, we present decoder manipulations based on deliberately caused ambiguities facilitating the error correction mechanisms used in several popular applications. This can be used to encode data in multiple formats or even the same format with different content. Implementation details of the decoder or environmental differences decide which data the decoder locks on. This leads to different users receiving different content based on a language decoding ambiguity. In general, ambiguity is not desired, however in special cases it can be particularly harmful. Format dissectors can make wrong decisions: e.g. a firewall scans based on one format but the user decodes different harmful content. We demonstrate this behavior with popular barcodes and argue that it can be used to deliver exploits based on the software installed, or use probabilistic effects to divert a small percentage of users to fraudulent sites. 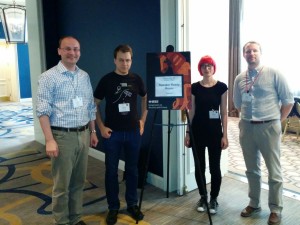 sec4dev Conference & Bootcamp 2022 – It was a blast!
sec4dev 2022 is over and wow wow wow - we are more than happy after having 4 days of great bootcamps, interesting talks and more than 170 participants, making the sec4dev Conference & Bootcamp a fantastic event!! From September 6-9, 2022 the TU Wien was turned into THE place to be for developers and everybody interested in security. ∞
ARES & CD-MAKE 2022 – Vienna calling!
The 17th International Conference on Availability, Reliability and Security (ARES 2022), was held from August 23 to… ∞
IMPACT 2022
After three years we were happy to organize another IMPACT for our partners, friends and employees on June 23rd, 2022. Under the motto #future/#zukunft, we addressed the topics of new work, the future of cyber security in Austria and presented current research topics from our company. ∞